How a Royal Mail Sorting Office Was Reborn as a School 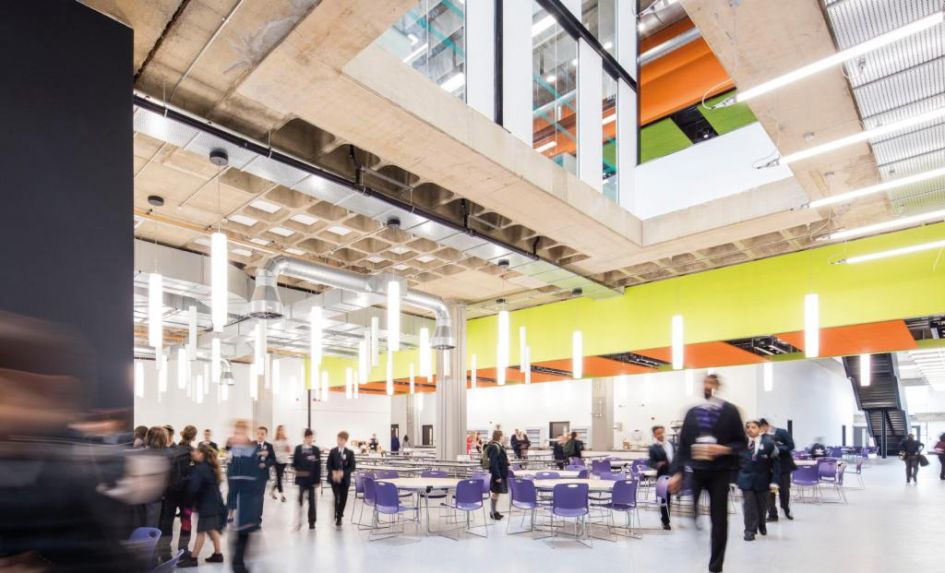 RP: Back in 2013 we’d been working with Northamptonshire County Council on various primary school expansion projects. NCC’s education department had succeeded in creating the primary places they needed in Northampton, but they knew that very soon they’d be having to address a huge demand for secondary places.

TM: Northampton International Academy opened in 2016 as a new free school, which would eventually be based in a new building constructed whilst the school grew in temporary accommodation. During the school’s first year, this accommodation consisted of five traditional mobile classrooms that made up the secondary phase and one doublesized unit that housed the primary provision. The early years were placed within another primary school that was part of East Midlands Academy Trust like ourselves, which made for a very comfortable process of growth.

RP: One day a project manager we were working for picked me up from Northampton station, and as we drove he pointed out of the window and asked ‘What do you think about that?’ It was a huge, derelict Royal Mail sorting office, so I said, ‘What about it?’ And he replied, ‘Can you turn it into a school?’ I said yes, and we were subsequently commissioned to do a feasibility study.

TM: I’d previously been a deputy head, making this my first headship. I joined the school in September 2017, just as we moved into very different accommodation that was similar to an airport terminal, since at that point we had around 800 students. Yet nothing could prepare us for when we moved into our new home in September 2018 – it’s a very large building set up for around 2,600 pupils.

RP: The facility was originally opened in 1981 by Princess Diana, in one of her first public engagements after marrying Prince Charles. At the time, it was a state-of-theart postal service centre, but after an arson attack in 2003 they started to wind down operations and moved out completely a few years later.

Our initial site visit was horrible. The space was dark, full of pigeons, occupied by squatters and generally a pretty unpleasant place to enter, but the building itself was amazing. The spaces were huge – the building measures 60m wide by 100m – and the structure was clearly built to be robust and strong.

TM: There was a point early on when it was hoped the process could be accelerated so that the building would be ready for use in September 2017, but it soon became clear that we should start planning for a second year of temporary accommodation. That was good, however, as it allowed me to ensure the space would be finished off in alignment with what we wanted to open with the following year, as not every part of the building would be fully complete.

RP: When stood at the centre of the building you’re 30 metres in from any external walls, so the first task was to examine how we could bring in light. We created large voids through the existing structure and introduced overhead roof lights to carry natural light throughout the building, to spaces that had probably never seen it before.

TM: Given that this was my first headship, I was conscious of the need to focus on what was going on in the school’s temporary site. I couldn’t really hit ‘pause’ until we moved into the new building, so I tried to keep out of the granular detail as the construction took shape.

RB: One issue that came up during the construction phase was when we discovered a series of secure safes. We didn’t realise what they were at first, assuming they were partitions based on lines indicated in the building’s 70s-era architectural plans, which we’d been given access to. The plans were hand-drawn and looked amazing, but we found discrepancies between what they showed and what we actually encountered on site. In the end, the safes proved almost impossible to remove, so we ended up leaving them in.

TM: We finally moved into the building a year after I became head, in September 2018. The temporary classrooms we’d occupied were then removed so that the playground could be built, which involved us having to remain largely indoors until February 2019.

RB: We placed a mezzanine floor around the building’s perimeter, so that we could double stack the regular teaching classrooms. The double height spaces in the building were set aside for larger teaching spaces in the science and art departments and elsewhere, since they were the wrong shape for standard classrooms. The mezzanine floor allowed the regular teaching classrooms to receive natural light and ventilation, and there was a courtyard on the roof which we in-filled to create the sports hall.

TM: The primary slice of the building was originally intended to be long and thin, with our two year groups placed above each other on different floors. However, this physical separation didn’t provide the sort of flow that we’d planned for. After a few weeks we moved the phase to classrooms that were next to each other on the same level, which made for a far more comfortable and cosy feeling in what’s an otherwise very large space.

RB: Looking back at the Building Schools for the Future era, there was a big push for open classrooms and ‘creative teaching’ similar to the approach seen in universities. After many of the people involved in that moved on, we’d see people putting partitions back between spaces so that they could teach in more traditional classrooms. There’s nothing wrong with either approach – but what was unique about the NIA project is that we had the opportunity to allow for both.

RB: It’s the only school in Northamptonshire that doesn’t have a 2.4-metre high fence at the front – instead, there’s a shared public plaza. The project was conceived as part of a wider effort to regenerate the area, with the school as the starting point. That’s why a series of commercial spaces was planned for the front-facing areas of the building, though the school’s presently in the process of repurposing them into education spaces.

TM: Due to a continuing shortage of school places in Northampton, particularly at secondary, we’ve taken occupancy of the 15% to 20% of the building originally held back for commercial space, which will be turned into learning environments in time for when we open again after summer.

RB: We submitted the building to the Royal Institute of British Architects Awards and it was great taking the judges round whilst all the kids were in there. Seeing how Tim’s been using the interior spaces has been brilliant.

TM: If we go about things properly, our diverse city centre intake will have opportunities to access world class facilities. The local theatre actually comes here to rehearse, because our theatre space is so close to what they need. That’s resulted in our kids getting to see Matthew Bourne’s adaptation of Romeo and Juliet during its national tour. We’ve been able to start raising our cohort’s aspirations to new levels.

RB: My favourite aspect of the building is the view you get all the way down the building from the atrium. It has these huge, grand vistas which, for someone who knows how it looked beforehand, are amazing to see. The building’s not very old, and could have been demolished. We’ve given it a new lease of life, and hope that it’s going to last a lot longer than was even planned for originally.

TM: The school already feels like a real part of the local community. It’s not necessarily everybody’s wish to have a school this size dropped into the middle of their surroundings, but so far things have been great. We’ve made a point of inviting in as many people as we can, as often as possible.