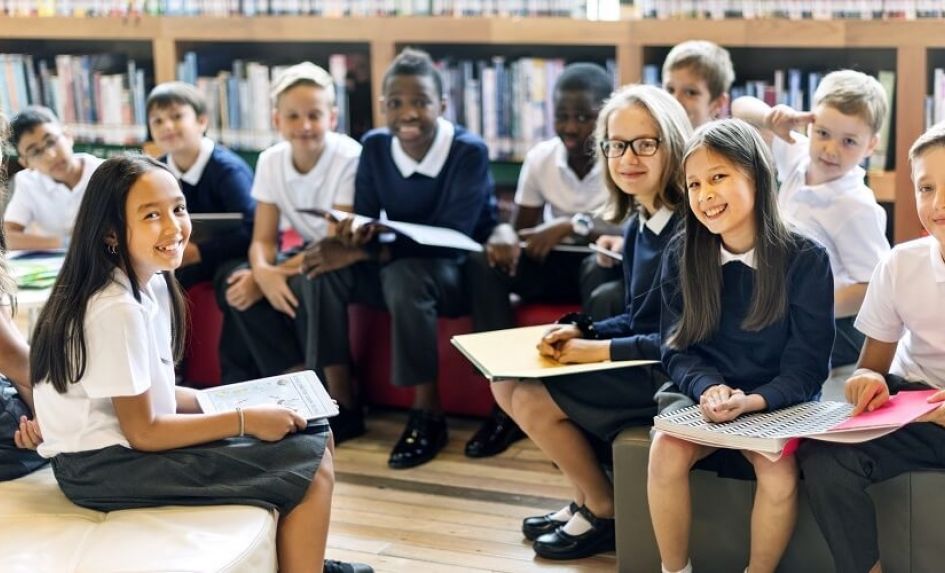 What attracted you to go into education?
I was at university studying performance arts, theatre and writing and met a young woman who was trying to be a teacher. She introduced me to teaching. She was a couple of years ahead of me because I took some time out between school and university. So as she began her career, because she knew I love drama and writing she used to get me to go into her school and work with her children. And as my relationship with her grew, so did the relationship with education. It was one of those epiphany moments. I suddenly thought ‘My God, how did I never think this was the job for me’. So, I finished my degree and enrolled on a PGCE. That’s how I got into teaching. And just as the real happy ending to the story, I’m still with that stunning woman. She’s a head teacher and we’ve been married for nearly 30 years.

You came to prominence for turning around failing Grange Primary School. How challenging was that?
It wasn’t an intended move. I had been seconded by the local authority to develop a programme to remotivate unmotivated boys in reading and writing. And one of the schools they wanted me to try and persuade to get on board was Grange Primary School, in Long Eaton. It was in real trouble and had been struggling for pretty much a decade. I fell in love with the school. I went away and told the Director of Education that as and when the job came up, I wanted to apply for it, which I did and got it. There was a clear passion for the school in its community. People loved the place and it was generational. And really the key, I think, was to climb underneath why they were struggling, and find out where the problems were.

And I think so much of it had come from what I’ve seen as familiar traits since in failing schools and failing organisations, which is people just felt disenfranchised. They’ve had tier upon tier of people coming in telling them they were rubbish, and telling them what to do and how to do it. The passion that just bled out of the school. For me, it was about starting again, with a blank slate, by asking how do we make the learning matter, not just some abstract in the future, but for now?

And you believe that the school library was a fundamental part of making learning matter?
Yes, one of the first things I did to turn around Grange Primary from a failing school to one of the most successful, was to build a state of the art purpose-built library with staff receiving full school library CPD training; the result proved my belief in the transformative power of libraries. Back in 2001-2 although there was a digital revolution, it wasn’t quite the digital revolution as we know it now. So many of the children there had no access to the internet or to digital technologies. A lot of the kids in our community not only didn’t have access to books, they also had no experiences to fire their imagination. A summer holiday for them might be to sit on their front step. So that library has to be a real core part of that, because if you want kids to engage in learning, you have to fire their imagination and build their aspirations. And in so many ways, a library is such a powerful resource for that.

Is that why you accepted the role of president of the School Library Association?
I’ve always believed that school libraries are vitally important. I believe that the current perspective on school libraries is too narrow. As we focus on the ‘levelling up agenda’ I will be spending my time at the SLA bringing school libraries back to the heart of the debate around education. Teaching all children, from all socio-economic backgrounds, how to access valid, trusted information from books and online and to interrogate what they are being told, has never been more important. Democracy only works if you have informed citizens to make informed decisions.

What do you see as the future for primary education looking forward?
We have to give primary schools a huge amount of leeway right now. I think the rest of this school year will be about ensuring that the children are safe, happy and emotionally stable, as well as the staff, and that the school is physically safe. I think the rest of the year is about survival and damage repair as far as possible. My instinct is that September 2021, will be the time to which schools can return to some semblance of normality, real normality and stability.

How did you find yourself on the global stage as an award-winning speaker?
The turnaround at Grange became very well known very quickly and we were doing some very innovative things. I was increasingly asked to talk at education conferences about the Grange story. And also, at the same time, I met my dear mentor and friend, who, sadly we lost a couple of months ago, the British author, speaker and international advisor on education in the arts to government, Sir Ken Robinson. He was fascinated by Grange. And because of his profile, he would tell people about what we were doing and it would bring extra interest. And eventually, the demands of running a school and speaking became too much. And Ken was the one who said, ‘You’ve got really significant things to say and my advice would be to come out with me and I’ll help you’. And that’s really how it began. So, initially, I went out and most of my work was talking around education. But what was really interesting was the timing because I came out of school just around the time of the global financial crisis. And organisations outside of education started to tap into my story around change, transformation and dealing with adversity. I got an agent through Ken’s support and wrote books, and it’s just really exponentially grown from there. And as you can imagine, given the events of the last year, my work and research over the last decade into change in human development, which has always had education at its heart, has become much broader and that has been really significant for people. I hope so anyway.