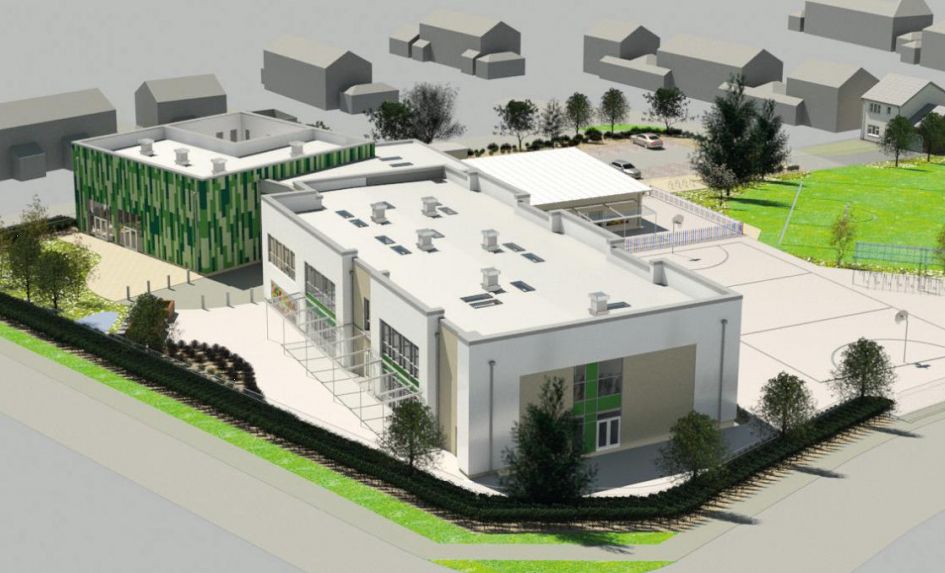 Jo Phillips is headteacher and Y2 teacher at Wyton on the Hill Primary School, and Adam Garner is associate architect for Saunders Boston Architects.

JP: When I first arrived at the school in 2009 it was in quite a dilapidated state, though a rebuild was already in the planning stages. It was supposed to have been finished in 2014, but after the funding was pulled, we had to lay a lot of plans to rest.

AG: Wyton was an unusual case, since the school is located right beside the RAF Wyton base. The Ministry of Defence were fairly heavily involved in the project, as a lot of the base children go there.

JP: When our LA finally approached me a couple of years ago with the news that we would be getting a new building, we were delighted at the prospect – though I was sceptical that it was actually going to happen for the first six months or so…

AG: The new school building needed to be constructed on the site’s playing field, whilst allowing the existing school to remain fully operational in the interim.

JP: Our old building dated back to the 1950s. It was a box built around a wooden frame structure, but having been subject to many improvements over the years – double glazing, UPVC doors and so forth – the frame had gradually rotted away inside. This came to light before I became head. The school had wanted to put a cover over the courtyard, but were advised they couldn’t because the building was essentially not supported by an internal framework.

AG: The new building’s interior is divided into three distinct elements: the pre-school, the main teaching wing with classrooms and ancillary spaces and the learning resource area. The latter is the building’s focal point, and can be seen from the exterior as a cube at the front of the site. The idea was to create a hub from which ‘streets’ and ‘neighbourhoods’ would wind out, with pupils moving from these very public, open spaces to the quieter classroom areas.

JP: We wanted a light and airy space. The old building had been quite closed, with fairly small corridors and very low ceilings. While teaching your class you’d quite often be aware of movement around the corridors, and it was difficult to keep tidy, owing to a lack of storage.

We have an active school council and a strong mechanism for pupil voice at the school which we call The Big Conversation. Once we knew the project was going ahead, we talked a lot with the children about what they wanted their new school to look like. Their suggestions included wider corridors, a bigger play area and more space for keeping their personal belongings.

AG: We linked the main hall and studio hall together, so that the school has the option of combining them into one larger space. The idea throughout was to get as much versatility into the building as possible, so that it could be used both by the school and for community events. The way educational spaces are being used is changing so much, and we’ve got to be as flexible as we can. It’s almost like we’re creating a stage or backdrop for the school and kids to use how they wish.

JP: There aren’t many facilities in the local area. A part of the hall can be annexed off, enabling us to let it out for community use while keeping the rest of the school secure.

JP: During the construction work we ended up with a tiny area down the side of the school for the children to play in which we called ‘the landing strip’, because of how it was shaped. That meant having to stagger our play times and elongate our lunch times, so that we could have some children inside and some outside.

We also had to repeatedly change our fire planning and fire exits. Previously, all classes would assemble on the field – with the field no longer there, we needed to change our assembly and egress points whenever the building site changed, and step up our fire practice frequency to two or three times per half term.

AG: It was fortunate that there was an area of open land owned by the MoD immediately adjacent to the site which we managed to obtain, but the school still had to cope with considerably less outdoor space for a year. It was a huge challenge, but the staff and pupils were exceptional – and the end result, what they have now, very much outweighs those difficulties.

JP: The lack of outdoor access was perhaps the most difficult part of the experience for our children, but it was almost like a life lesson – that if you’re patient and manage things carefully, good things will happen in the end. When we moved into our new building, all they did during playtime for the first week was run around and squeak, because they were so excited!

AG: When the building was handed over, the school was absolutely thrilled. The children and staff had made multiple visits to the site throughout the construction process, but seemed almost overwhelmed once they actually took ownership of it. It’s changed from being a site comprising a failing single storey building with maintenance issues into a whole new school. It’s made a world of difference to them.

JP: I think I underestimated how positive the impact would be on the children’s learning and general behaviour. The school has always felt really busy, and still does to an extent, but there’s now a new focus, purpose and sense of calm to what we do.

As soon as we moved in, people started coming to work earlier. The new building has plenty of working spaces, which we didn’t have before, so our staff room can now be a place where we just sit and talk. Staff are always commenting to me how much the new space has impacted positively on their wellbeing. It’s more than just a building.