How an Unusual Design was Perfect for this New Build School 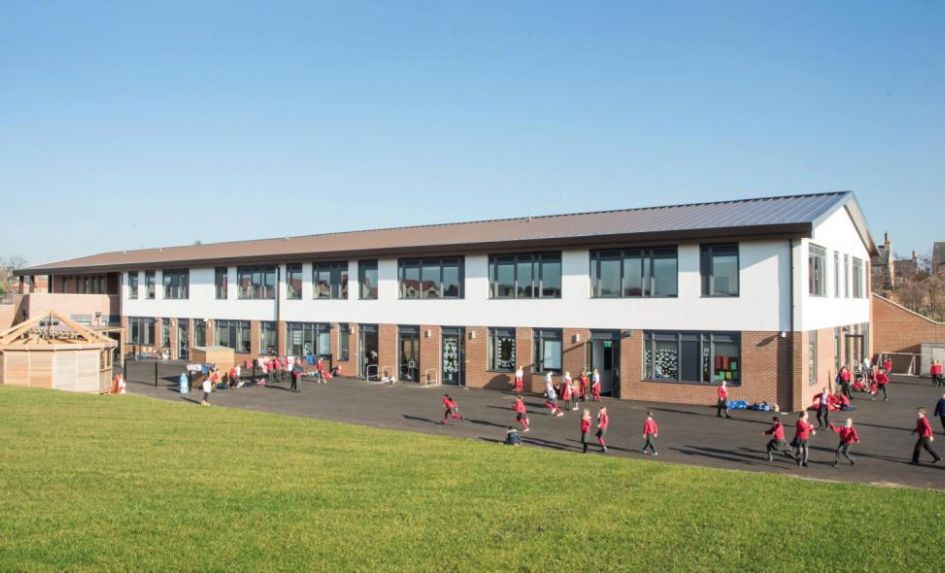 The work we carried out for Wynyard Church of England Primary School was a project funded by Education & Skills Funding Agency. We came on board in September 2017, after an outline feasibility scheme had been drawn up that included a basic design outline for a two form entry primary school over two storeys.

We took on that design during the project’s bidding stage, and working alongside the construction firm ISG, looked at how we could build further efficiencies into the plan and help them create a more competitive bid to win the job – which we were ultimately successful in doing.

Wynyard CoE is a new school that was formed as part of a wider residential development, areas of which were being built while we were on site. As the new school building took shape, the school itself was set up and began operating in temporary accommodation approximately a mile away from the site.

Having secured the bid, we liaised with the Diocese of Durham to sign off on the design and ensure it was something they could work with. There was also the need for us to meet various technical requirements set by the DfE and comply with BB103 guidelines.

As the project progressed, the design changed in several ways that might have outwardly seemed quite minor, but actually amounted to fairly significant alterations.

One particular headache was that the initial feasibility had proposed a retaining wall along two sides of the building that included a ‘notch’, where the wall came in and jutted back out again.

The reason for it being there was to comply with DfE’s very specific environment targets, as the area in question would otherwise lack any access to natural light.

Ourselves and ISG were able to come up with a way of building the retaining wall in a straight line for less, without the need for a ‘kink’, but that meant adding more area into the building – which unfortunately fell outside the procurement restrictions we were under.

However, following a lengthy exchange with the DfE, we eventually reached a compromise and designated the unlit area as a non-usable void – for the moment, at least. Otherwise, the process of implementing the design was a fairly smooth one.

The building has a somewhat unusual configuration, in that it appears to be a single story building from certain perspectives because of how the levels are worked.

This was a deliberate decision in response to planning issues which had been picked up in the feasibility design – being a fairly large building surrounded by fairly small detached residential properties, there was some concern from residents over the school’s visual impact.

The decision was therefore made to sink the building slightly into the surrounding land in order to make it less visually obtrusive. As you approach the school from the car park, you’re looking at what appears to be a single-storey building.

The planners were keen to see a building that fitted into its surroundings and matched the neighbouring context, which prompted us to opt for brick building materials similar to those used for the local housing. We were encouraged specify a slate roof, but chose to go with metal instead.

The primary reason was down to cost, but it also allowed us to put a much shallower roof pitch on the building to further reduce its visual impact. Being a fairly wide school building, the apex of a pitched slate roof would be necessarily quite tall.

The roof was then coloured brown/bronze rather than grey, to prevent it from looking too industrial.

Visitors enter the building via the upper level, which is where the reception and admin areas are located. Walking through, the KS2 classrooms are situated on the top floor, most of which have direct access to outside space, which is quite rare to see on the upper storeys of primary schools.

As you move downstairs, you’re essentially entering a semi basement. At the rear of the building is the hall, alongside a studio space and dining hall – the latter of which occupies a relatively high space in which we were able to install high-level windows that let in plenty of light.

The library area is situated off a main corridor that’s easily accessible – while it unfortunately lacks natural light due to design constraints, it’s still a pleasant, open space.

Also nearby is the aforementioned void space, which the Diocese and school ended up converting into changing rooms via a separate contract to create added value.

To the front, there’s lower ground level exterior access where the KS1, early years and foundation areas are located, giving them direct access out onto the play areas.

Our approach to the building’s heating and ventilation wasn’t as different as one might think, given the semi-subterreanan design. To comply with the ESFA’s fairly stringent energy performance and ventilation requirements, we made use of natural ventilation heat recovery units which sit above the ceilings in the classrooms.

These are small units that connect to louvres above the windows and monitor the rooms’ CO2 levels. When when those levels rise above a certain mark, the vent will activate and provide additional support.

The system isn’t intended to work separately from opening the windows to let in natural ventilation, but rather complement that.

If it’s a cold day outside and opening the windows is impractical, that’s when the unit takes over ventilation duties, avoiding the need to let cold air in and warm air out. On warmer days the classroom windows can be opened as normal, while the units lie dormant.

We were still able to ventilate the hall space using natural ventilation through the use of three wind cowls.

The kitchen is ventilated mechanically, as tends to be the case in most school catering facilities, with extracts from the kitchen taken to a plant room directly above on the upper level, before being expelled from the building.

Taken as a whole, I think the building works really well in its context. Between the way the levels have been worked, the surrounding landscape and our efforts at matching the building’s aesthetics with those of the neighbouring residences, the school sits very well in its setting.

The school officially opened in its new home in January this year – I understand that the staff and pupils were excited to move in and are very happy in their new surroundings.

Scott Lunn is an architect and associate at Watson Batty Architects.