Physical activity in primary school – The rise of the standing desk 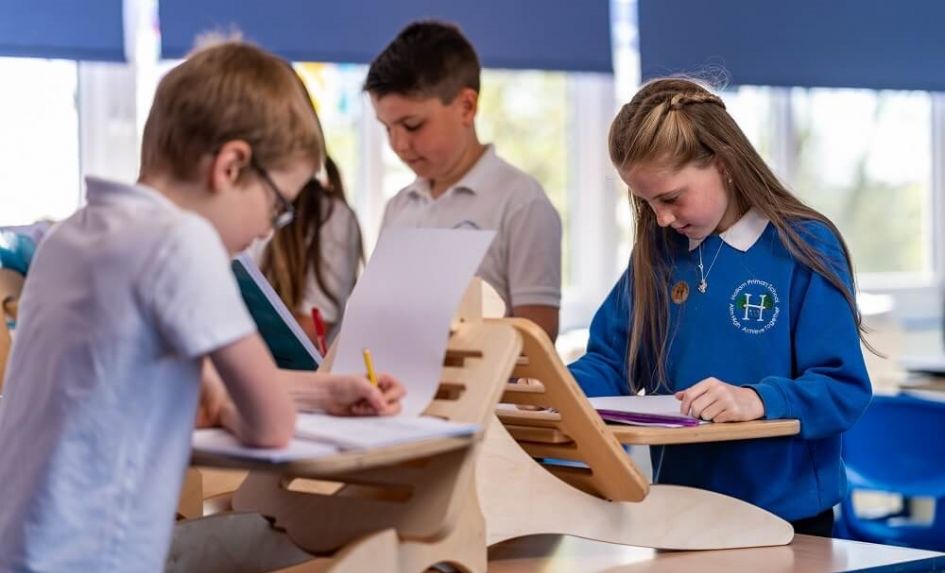 Introducing more movement into the school day is something that can benefit learning outcomes for all pupils, but especially individuals with SEN.

One way schools are doing this is through the use of standing desks. Sitting still for any period of time is something most children find very difficult – as it’s simply not how they are programmed – and in the case of pupils with SEN, it can be even more challenging.

That is one of the reasons why education professionals are not only using teaching methods that integrate greater levels of physical activity but are also taking steps to enhance the broader classroom environment.

This includes adapting layouts to maximise opportunities for movement and investing in specific resources that encourage pupils to move more. Which is where standing desks come in. Rather than needing to remain seated for traditionally sedentary activities, such as handwriting and maths, when using a standing desk, pupils are able to move while they learn.

This allows them to make ‘micro movements’ which in turn helps improve focus, concentration and behaviour, while benefiting learning outcomes. In the case of children with ADHD and other neurodiverse conditions that are linked to hyperactivity, they need to physically be moving to be able to learn and standing desks facilitate that.

How are standing desks used in the classroom?

EIGER student standing desks are manufactured in the UK and made from robust, sustainable birch plywood. They can be placed on top of existing tables and only take up the space of a single child. When not in use they can quickly be folded away or returned to the eco-bag provided and hung up on a peg – something the students are encouraged to do themselves.

A class may typically introduce between four to eight standing desks that are used by pupils on rotation throughout the day. In some schools, the adult versions of the desks are also used by teachers and office-based staff.

How popular are standing desks?

More than 380 schools across the UK are currently using standing desks and view them as a key part of their active learning strategies. These schools consistently report seeing improvements in behaviour, concentration and engagement levels, as well as neater handwriting and increased productivity.

While standing desks are currently most commonly found in primary schools, many secondary schools, colleges and universities are also now starting to introduce them; as an individual who benefits in primary school will equally benefit at every stage of their education journey.

Standing desks have the potential to support schools with many of their key priorities, including:

What we consistently hear from schools using standing desks is that concentration and productivity levels have improved and disruptive behaviour has reduced. Not to mention the health benefits gained from increasing physical activity levels. Obesity is a growing problem amongst children.

The latest figures compiled by the National Child Measurement Programme reveal that 35 per cent of Year 6 children are overweight or obese, along with 21 per cent of children aged 10 to 11. Anything that reduces the time children are sitting down, and encourages them to learn in more active ways, is a positive step.

Due to the broad spectrum of positive impacts standing desks can have, schools can use a variety of different types of funding to purchase them, including Pupil Premium, Sport Premium and SEN budgets.

Any schools who are interested in finding out more are also invited to arrange a free trial by emailing nick@iwantastandingdesk.com.

Nick White is founder of I Want A Standing Desk.